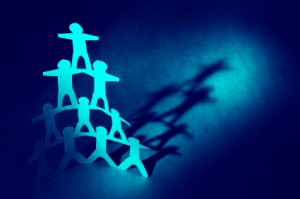 In a model which aims to estimate risk there are two main indicators which are used to describe the uncertainty in the variables:

In this article I will cover modelling of correlation.

If two variables are correlated it means that they follow a distinct pattern when their values change.   They correlate in a specific way.

Correlation is in statistics and probability calculation is a measure of the strength and direction of the linear dependency between two variables.  Empirically observed correlation is a necessary, but not sufficient assumption to uncover causality (i.e. if one variable is the cause of the development in another)

Between two variables mean that they move in the same direction

Between two variables mean that they move in opposite directions

Means that the variables are independent of each other

Correlation will contribute to increased or reduced risk.

Generally a positive correlation between revenue items and cost items will reduce risk.  If the price of a product falls and the cost of producing it also falls (the product and cost are positively correlated) it means that the risk level is lower than otherwise.  If the correlation is negative cost will increase if product prices fall.  The risk is therefore higher.

As this shows it is vitally important to model correlation to get a good picture of overall risk in the cash flow and P&L of a company.  Correlation can also be modelled as regressions, but I will focus on how it can be modelled as coefficients for use in for instance Excel @Risk models.

The impact can be quite significant, as seen in the chart below showing the risk level with and without correlation: 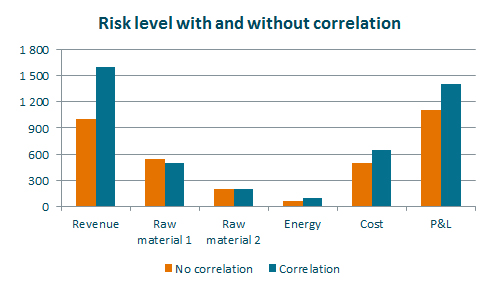 Correlation coefficients can be modelled in different ways

Or as a combination of these depending on what best describe the relationship between variables.

Some questions are important to ask when using historical data to describe the future: 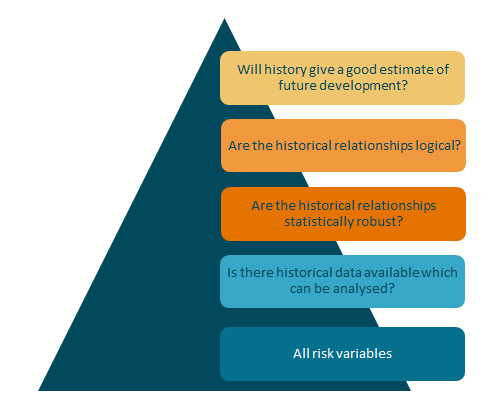 As the figure shows, historical correlations should not always be used.  Often the available data is not good enough, the calculated relationships are not necessarily statistically robust and they may not even sound logical.  In addition history may not describe future development well. – changes may occur which makes what worked yesterday not work today.

There are some pitfalls worth mentioning when modelling correlations:

My overall recommendation for modelling correlations is:

Finally, here is an example which sheds light on why it is so important to model the relationship between variables.  Let us assume that the Purchasing Manager wants to hedge the price of one of the raw materials the company is using.  Hedging it will reduce the risk the PM is responsible for.  Let’s assume he hedges 50% of the cost for Raw material 1.  What will the impact on the company’s risk level be? 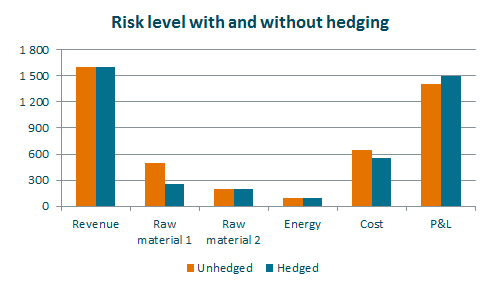 As the Purchasing manager expected, the risk is reducedboth for Raw material 1 and for total cost.  But the overall risk is increased.  This is due to the positive correlation between revenue and cost.  So, if the volatility in raw materials is removed or reduced, without the same being done for products creating revenue, the result is increased variability overall.

What looked like a nice, risk reducing measure was the opposite.  It increased the company’s risk.  This underlines the importance of modeling the relationships between variables.  Without doing that, it is not possible to have a good view of the actual risk.